If you’re pulled over on suspicion of driving while intoxicated or stopped at a roadblock, the police will be looking for signs that you’re impaired. They’ll look for obvious indicators, such as empty alcohol containers in the car, but they’ll also look at your mannerisms, check to see if they can smell alcohol on your breath, and note whether your eyes are bloodshot. They may also choose to do field sobriety tests, like blood and breath tests. 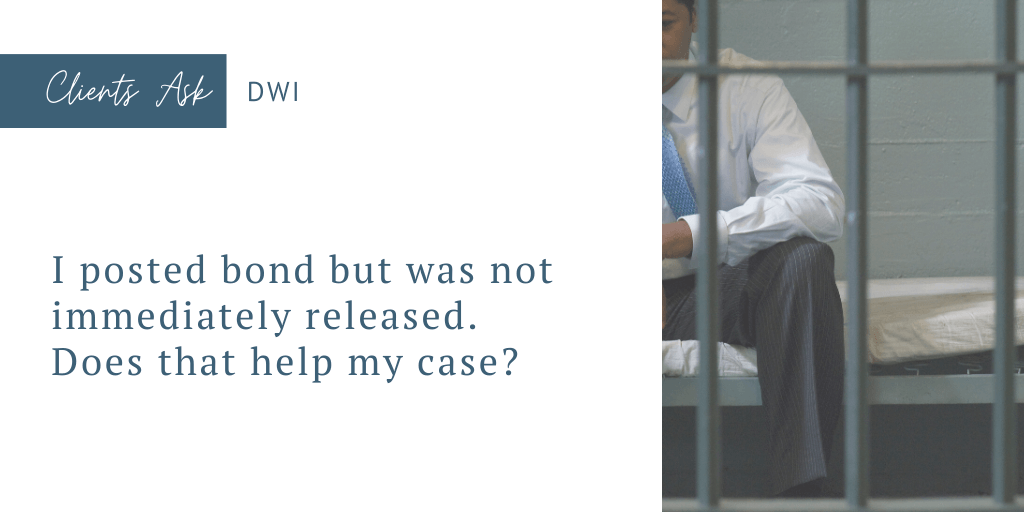 After you’ve been arrested on suspicion of DWI, you’ll be put in jail while the police book your case. In order to get out of jail until your trial, you must meet the conditions for pretrial release.

Generally, that means you have to be sober enough that you don’t pose a danger to yourself or others. You may also have to have someone come to the station to pick you up and supervise you. Finally, you may be asked to post a bond. Once you meet these conditions, you must be released from jail.

When you post a bond, you put up a certain amount of money as security that you will show up to court. If you don’t show up to court, you forfeit the amount of the bond. If you do show up, you get your money back. In some cases, you may simply be able to sign an agreement to appear without posting a bond at all. After you put up the bond, you’re free to go as long as you’re not disorderly, disruptive, or so impaired that it might be dangerous to release you.

What if you post your bond and they don’t let you go immediately?

In the Knoll cases, three defendants had been booked for driving while intoxicated. In each case, the defendants were polite and coherent. None did anything to provoke the arresting officers. However, each was kept in jail for hours after he or a family member attempted to post a bond.

The court pointed out that the state has ample opportunity to collect its evidence in a DWI case. It has the testimony of the arresting officers and the local magistrate. It has footage of the arrest. It has the results of your breath or blood test. All the evidence collected during your arrest can be used against you.

However, you have the right to collect evidence for your own defense, too. That includes being around your friends, family, and attorney. They can witness your state of mind and testify in your favor. In addition, you can have your own chemical analysis done. Those types of tests may produce errors and if yours is different than the state’s, the evidence might be thrown out. The right to gather evidence for your defense is part of your Constitutional right to fair process.

If you are not released promptly from jail, your case may be dismissed.

When the state holds you in a cell after you’ve met the conditions for pretrial release, it’s blocking your ability to defend yourself under the law. That deprives you of a Constitutional right. Most importantly, that means that your case may be thrown out altogether. If you don’t have an opportunity to gather evidence to defend yourself, the state won’t be given an opportunity to use its evidence against you. Failure to release you from jail at the appropriate time can cost the state its entire case.

What should I do if I’m arrested under suspicion of DWI?

The first step you should take when you’re arrested is to call an experienced DWI attorney.

If you’ve already gone through the arrest, jail, and release process, you still need an attorney. Contact one as soon as possible after your release to recount the details of your arrest and detainment. Procedural errors in the arrest process can stop your case from going forward, as can a failure to release you when you’ve met the pretrial conditions for release. Your attorney needs those details when they’re fresh in your memory, so act quickly.

If you’re arrested, remember to be polite and cooperative. The police do not have to release you from jail if you’re violent or potentially dangerous.