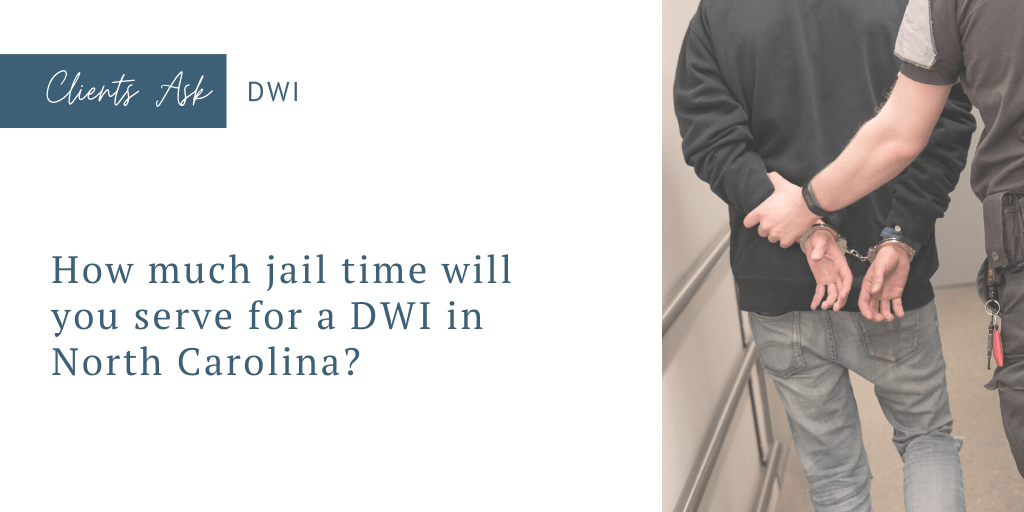 First, before you have to worry about any punishment at all, the state is going to have to prove beyond a reasonable doubt that you were, in fact, driving while impaired. The prosecution will often provide evidence from a breathalyzer or blood test. When you’re arrested on suspicion of DWI, you’re required by law to provide a breath or blood test to determine your blood alcohol level. Refusal to take the test means you’re going to lose your license for a year and they may still be able to convict you for the DWI even without blood or breath test evidence. The legal limit for blood alcohol in North Carolina is 0.08 for first-time offenders; it’s 0.04 if you’ve already been convicted of a DWI. For drivers under the legal drinking age of 21, the legal limit is 0.00. If you’re over that limit, you’re likely to be convicted of a DWI.

Even if you’re under 0.08 (or refused the breath or blood test), you may still be convicted if the prosecution can provide evidence that you were impaired. That may include eyewitness testimony from police officers or other witnesses that you were weaving from lane to lane, driving at night without headlights on, or otherwise demonstrating impairment of your ability to drive safely.

Your case may turn not just on evidence, but on the way that evidence was obtained and the procedure that was followed in your arrest. For example, police officers must have reasonable suspicion to stop your car, or they must stop you at a DWI checkpoint. If they had no reason to suspect that you were driving under the influence, they didn’t have the right to pull you over in the first place and your case may be thrown out. The laws surrounding admissibility of evidence in North Carolina are complex, so you should speak to an attorney as soon as possible after your arrest to ensure that you relate all the details while it’s fresh in your memory.

If you’re found guilty of a DWI in North Carolina, the sentence you face depends on several factors. Subsequent DWI charges will be punished more harshly than first offenses. If someone was injured or killed as a result of your DWI, you’ll face more severe punishments. DWIs are split into 5 different severity levels, each with its own set of consequences. Levels 1-5 are misdemeanors; Aggravated Level 1 is a felony.

At any level, you may be required to participate in a state-approved substance abuse program; in some cases community service may be substituted for jail time. In general, level 3, 4, and 5 DWI charges can be served via community service rather than jail time. Levels 2 and below require jail time.

Mitigating factors, which will weigh in your favor, include:

The judge will weigh these factors and determine an appropriate sentencing level. This is a complex process and is best left in the hands of an attorney.

When you’re convicted of a DWI, you lose your driving privileges for a certain amount of time. The length of the punishment depends on the number of previous DWI convictions on your record.

If you can demonstrate serious hardship as a result of having your licensed revoked and you’ve been sentenced under Level 3 or higher, a judge may choose to reinstate your license with certain conditions. If you’re convicted of a DWI while driving on a suspended license, the state of North Carolina can actually seize and sell your car in addition to permanently revoking your driving privileges.

If your blood alcohol level was above a 0.15 or if you’re being convicted of a second DWI within the last 7 years, you’ll be required to install an ignition interlock device in your car. These devices must be leased from various companies and require regular maintenance. An ignition interlock will prevent your car from starting until you submit to a breath test to prove that you haven’t been drinking.

If you’re being charged with a DWI, speak to one of our experienced DWI attorneys as soon as possible. We’ll fight to prove your innocence and to make the whole trial process as smooth and painless as possible. A DWI is a serious crime in North Carolina. Don’t face the threat of jail time, license suspension, and serious fines without the help of an expert DWI attorney.