Alienation of Affection and Criminal Conversation are civil claims that can be filed in North Carolina and a limited number of other states.  Otherwise known as “heart balm” actions, these claims are often filed together against a third party actor, who engages in conduct that jeopardizes the marital unit. 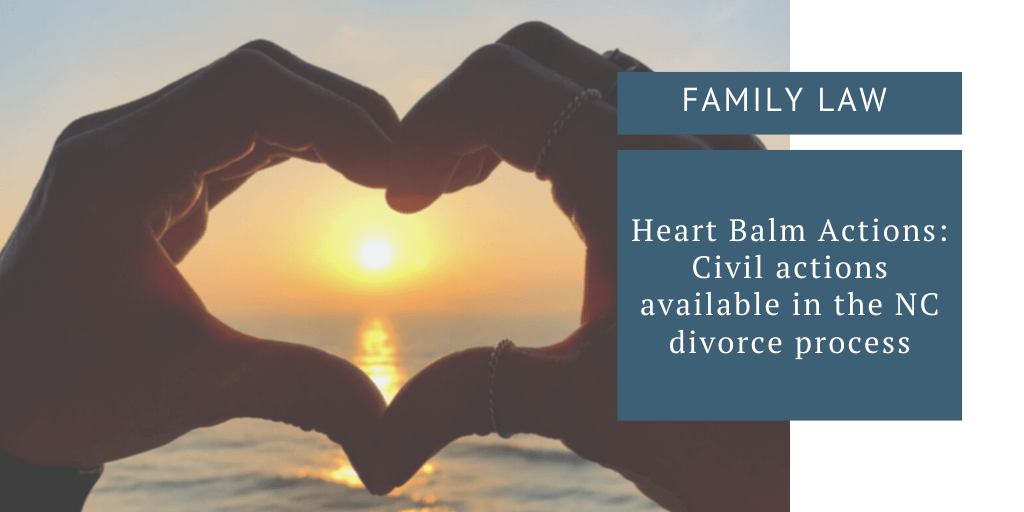 However, the Supreme Court of North Carolina recently upheld the laws and deemed that the laws do not violate the United States Constitution, upholding a several million dollar award when it was found that a third party engaged in an affair with the Plaintiff’s spouse. Therefore, the claims remain a viable option for a spouse who suffers the loss of his or her marriage due to the actions of another.

In North Carolina, you can sue someone who has caused you to lose the affection of your spouse, assuming you meet certain criteria.  While this often means suing the lover or paramour of your spouse or ex-spouse, it can include anyone who interferes with an otherwise loving and intact marriage, including in-laws.  After changes in the law, one can only sue a natural person for alienation of affection, which means you can’t sue a company or corporation under the claim.

Additionally, the offending party need not be the person who pursued the affair or conduct leading to the dissolution of the love and affection in your marriage. A plaintiff only needs to prove that the person being sued was an active participant, initiated, or encouraged the affair or other conduct leading to the loss of affection.  You also don’t have to prove that your marriage was perfect, but instead must only prove that there was some love and affection at the time.

Defenses to Alienation of Affection

Aside from the constitutional challenges to alienation affection, possible defenses include (1) that there was in fact no love and affection in the marriage at the time of the offending act; (2)that the offending party was unaware that the parties were in fact married; (3) that you consented to the conduct; or (4) or they could claim that the 3 year statute of limitations expired since the act was discovered and caused the alienation.

This lawsuit is similar to Alienation of Affection claims but requires proof that sexual intercourse outside of the marriage has taken place. Only two things must be proven to establish your claim for Criminal Conversation:

It is important to note that you do not have to have direct proof of the two factors listed above, “circumstantial” evidence can be used as well.

Though there are four possible defenses to a claim for Alienation of Affection, only two defenses are available for claims of Criminal Conversation. These defenses include (1) that you were already separated when the sexual intercourse took place; or (2) the defendant could claim that the statute of limitations has expired. Defendants are ultimately more vulnerable in claims of Criminal Conversation with only two available defenses, in comparison to the four defenses available in Alienation of Affection claims.

Despite the national trend eliminating the causes of action of Alienation of Affection and Criminal conversation, under current law, these claims remain available to plaintiffs in the State of North Carolina to right the wrongs he or she suffers at the hands of someone who maliciously interferes with his or her marriage.

Have another question about the North Carolina divorce process? We’ve answered many common questions here and you can always ask other questions by contacting us.

If you are going through divorce and are seeking to file a heart balm lawsuit or have become a plaintiff in such a case, contact our experienced family law team. We’re ready to help you understand all aspects of these types of civil suits and explain your options.