Unfortunately, companies in the United States must accept that, at some point, they will be sued and brought to court. Companies should budget for this eventuality and simply anticipate that they will have to deal with disputes as a major cost of doing business. Similarly, if you are a company based outside the US, doing business in the States, you need to prepare for the possibility of being sued in the US. There are many specifics to understand and address when foreign corporations are sued in the US. 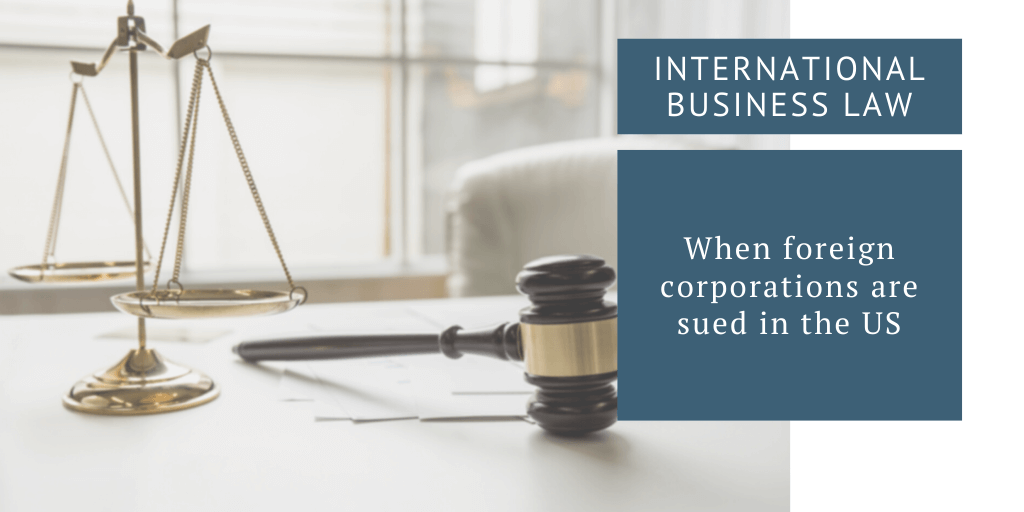 As a non-US based company, getting sued in the United States means that you may have additional defenses available. For example, the paperwork documenting the lawsuit must be served properly. Most countries, including Germany, the Netherlands, and Canada, are signatories to the Hague Service Convention of 1965 (Hague Convention). The Hague Convention provides a streamlined approach to serving individuals and corporations in foreign countries.

It is extremely important that the company being served gets the paperwork to the company’s attorney as soon as possible. If a reply is not filed within thirty days, a default judgment may be entered against the company. This has the effect of the allegations in the lawsuit deemed admitted, before you even have a chance to reply. In addition to the risk of default, if the case was originally filed in state court, you only have thirty days to remove the case to federal court.  As a non-US based company, you can request that the federal court take jurisdiction to avoid a potentially unfriendly local court system.

As you can see, transnational litigation is complex. Many companies choose to ignore a lawsuit. In our experience, this is a terrible decision because it can lead to the forfeiture of US-based assets including real estate and bank accounts. Even if the company does not have any US-based assets, active judgments can make it difficult to do further business in the United States. Finally, there are several ways a US-based judgment can be domesticated in a foreign country and enforced. Long story short, do not ignore the problem. Hire an attorney who understands the complex jurisdictional and service requirements to fight the lawsuit.

In many cases, it is best to have a relationship with an attorney in the states you are doing business in from the start. The attorney can make sure that your company is protected with the initial paperwork, as well as being there to handle any lawsuits that are filed. At SeiferFlatow, PLLC, we have experience helping foreign companies who are sued in the United States. We are adept at handling these complex issues and getting the best results possible for our clients.