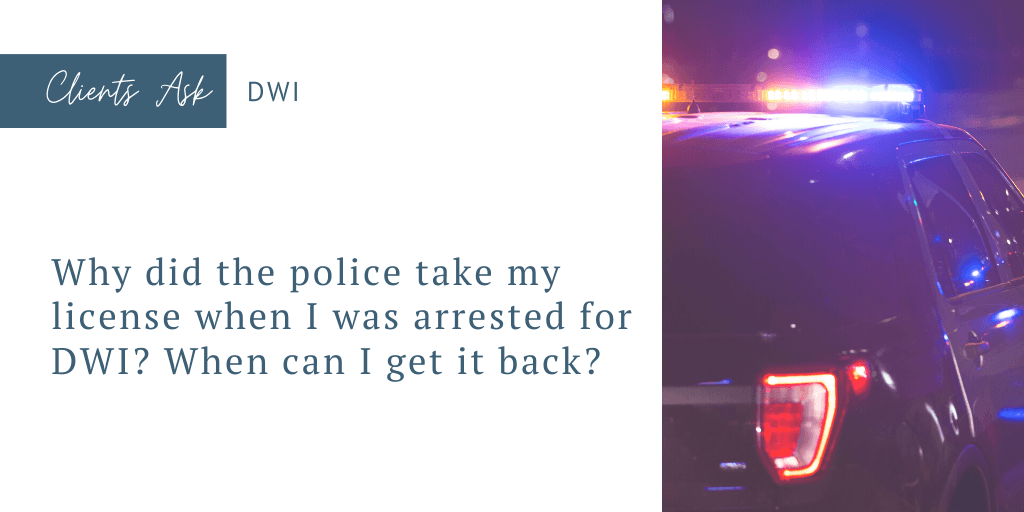 A police officer can pull you over either because she has some reason to believe you might be impaired or because you’re passing through a random checkpoint. At a random checkpoint, the officer will generally talk to you to determine if you may be impaired. If she thinks that you or if you were pulled over specifically on suspicion of driving while impaired (DWI), you’ll be asked to take a DWI Breath Tests: Know Your Rights. What happens next depends on state law. So, what happens to your license in North Carolina?

In North Carolina, the legal limit for a driver over the age of 21 is a blood alcohol content of 0.08%. For commercial drivers, the limit is 0.04%. For drivers under the age of 21, the limit is 0.0% – any blood alcohol is grounds for a DWI conviction. For drivers who have a prior DWI, the limit is 0.04%. If the test shows that you’re over the legal limit or if you refuse to take the test, the arresting officer will take your driver’s license. That immediate suspension will last for 30 days. You may be able to regain limited driving privileges after 10 days, until your court date.

For how long will you lose your license?

However, an experienced attorney may be able to help you get your license back if you need it, for example, to support your dependents. Those issues depend heavily on your particular circumstances and the circumstances surrounding your DWI.

After the period of suspension is over, you’ll have to pay to reinstate your license. The fee to reinstate a license suspended because of a DWI is $100; the fee for general reinstatement is $50. You’ll also have to pay a $5 processing fee. You won’t be able to get your license reinstated until you’ve completed every part of your sentence, including any jail time, community service, substance abuse program, and payment of fines and court costs.

If you’re caught driving under the influence while your license is already suspended for DWI, you’re going to lose your car. North Carolina has the right to seize and sell it under those circumstances.

License suspensions and the reasons for them will be added to your permanent North Carolina driving record. That means your car insurance rates are going to go up. Prospective employers can also view your permanent record, meaning that a DWI may affect your employment prospects. You may also run into trouble if you apply for a position that requires security clearance. The background check will show your conviction and license suspension, which may be grounds for denial of your security clearance.

Licenses in Other States

What should I do if I’ve been pulled over on suspicion of DWI?

If you’ve been pulled over and had your license suspended, don’t drive. If you break your suspension, the judge is going to be much harder on you in court. Secondly, contact an experienced DWI attorney. You’re going to have to go to court and face an attorney who has plenty of experience with DWI convictions. You need expert help to defend yourself and ensure that your rights are respected.