No, you should not quit your job because you may be giving up a potential legal remedy against your employer. Before you decide to quit your job, you should consult with an experienced employment law attorney to discuss your particular situation and find the most desirable course of action to take. 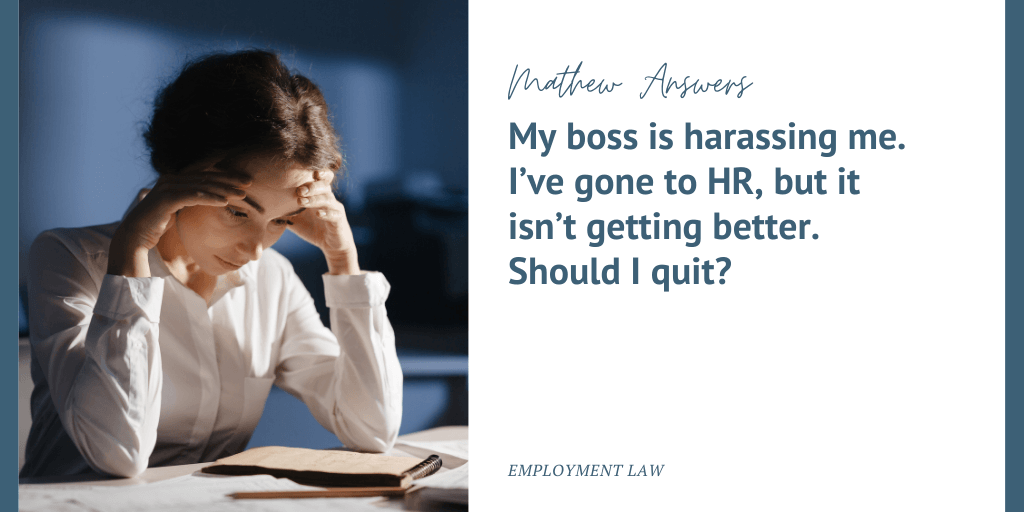 Am I really being harassed?

First, you should consider whether or not you are being “harassed” at work. There are several kinds of harassment that are illegal and actionable under federal and North Carolina law; however, there are instances where an employee may think she is being harassed but, legally, she has not.

For instance, harassment must be unwelcome conduct. Welcome versus unwelcome conduct can be difficult to discern. Additionally, only conduct that rises to a certain level will be considered harassment. Although a person may consider certain behavior harassing, the law will only recognize severe or pervasive harassment as unlawful. Simple teasing, offhand comments, or isolated incidents that are not extremely serious do not violate federal law.

It is important to emphasize, however, that it is possible for a single instance to be so severe that it rises to the level of unlawful harassment, particularly when the harassment is physical.

Workplace harassment is a form of unlawful discrimination. The primary federal statutes prohibiting harassment are:

Title VII is the primary law cited in harassment claims and its principles apply to proving and defending against harassment are closely followed by other statutes. Harassment claims under Title VII are generally divided into two categories.

What is Quid Pro Quo Harassment?

Quid pro quo harassment typically applies to sexual harassment. It literally means “this for that” and applies where a supervisor seeks sexual favors in return for a job benefit (for example, a promotion or raise) or to avoid a job detriment (for example, a demotion or pay cut).

Quid pro quo harassment requires a tangible employment consequence (often referred to as an adverse employment action) of refusing to submit to a harasser’s demands (for example, an employee is terminated for not submitting to the sexual demands of his supervisor).

An unfulfilled threat of tangible economic harm may have the appearance of quid pro quo harassment (for example, a threat that an employee will be demoted or suffer other tangible employment consequences if they do not submit to a supervisor’s sexual advances), but because the threat is not realized, the harassment is legally considered hostile work environment harassment. Because this distinction may be unclear or confusing, quid pro quo harassment is sometimes referred to as tangible or economic harassment.

Favoritism based on coerced sexual conduct may also subject an employer to liability under a quid pro quo harassment theory. For example, if a woman is coerced into sexual conduct in return for a job benefit, that coercion arguably occurred on the basis of her sex, and others who were qualified for the benefit but did not receive it may be able to bring a claim

Quid pro quo harassment can apply to harassment based on protected classes other than sex. For example, religious quid pro harassment can exist when employees are required or coerced to abandon, alter or adopt a religious practice as a condition of employment. For more information on religious discrimination, harassment, and accommodation.

What is Hostile Work Environment Harassment?

Hostile work environment (HWE) harassment applies to all forms of unlawful harassment, not just sexual harassment. This means that harassment based on any protected class referenced above can be HWE harassment. HWE harassment is more widely alleged than quid pro quo harassment and is more subjective. It does not require tangible job consequences or financial injury.

To allege HWE harassment, a plaintiff must show that the alleged harassment was:

If my boss is harassing me and I quit, what legal remedy might I lose?

You will lose the ability to negotiate what is called a severance or separation agreement. Severance agreements are agreements in which your employer agrees to give you benefits, such as salary continuation, outplacement assistance, and a continuation of your health insurance in exchange for your agreement not to sue your employer for any claims arising out of your employment.

If I am offered a severance agreement should I sign it?

Generally, employers write severance agreements in their favor. Severance agreements can be very complex, and if not carefully reviewed before you sign, you may obligate yourself to a non-compete or non-solicitation clause, which could seriously impair your ability to take a new job.

If you are offered a severance agreement, you should consult an experienced attorney that can help you understand whether you should accept the agreement or take other actions.