Early last week, the United States Supreme Court handed down its decision in Navarette v. California, a landmark case in criminal law that wrestled with whether a driver can be pulled over by the police solely on the basis of an anonymous tip. 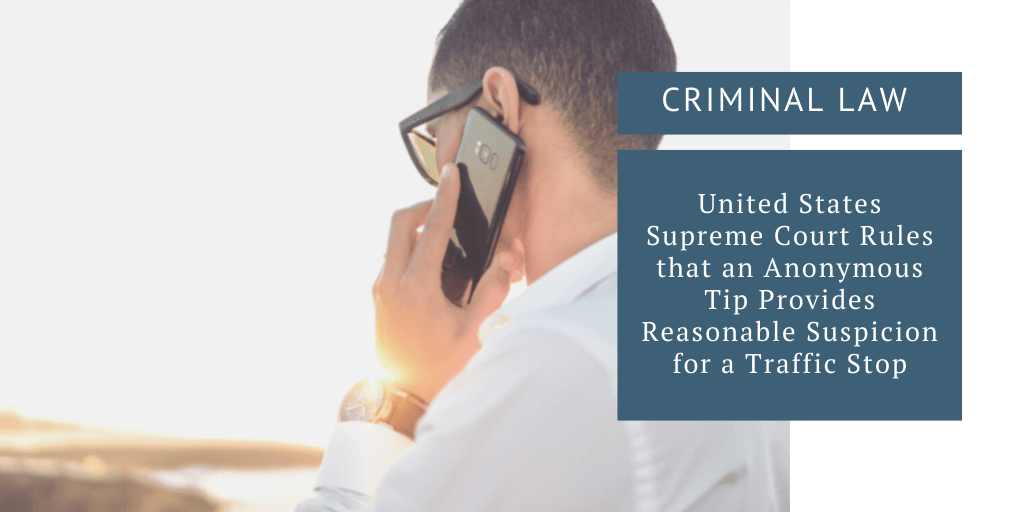 In Navarette, a woman called 911 to report that a silver Ford pickup truck had been driving erratically and ran her off of the road. As part of the call, the woman provided the license plate number of the pickup truck, as well as the direction she was traveling on the highway. Shortly after the call came in and was relayed to officers in the field, an officer pulled over a truck matching the tipster’s description and after smelling marijuana, conducted a search which led to the discovery of 30 pounds of marijuana in the truck and the arrest of the driver and passengers.

The defendants tried to get the seizure of the marijuana thrown out of court, arguing that the tip did not provide the police officer with the reasonable suspicion needed to conduct a traffic stop. Normally, to make a traffic stop, an officer needs to have reasonable suspicion that a driver was acting illegally, such as when a car is caught speeding, or when an officer sees a defendant driving as if they were under the influence of drugs or alcohol.

North Carolina criminal law has not widely accepted the use of anonymous tips to justify traffic stop based on the information provided in the tipster’s call. Before the Court’s decision in Navarette, North Carolina courts had, several times, held that the information provided in an anonymous tip, even a detailed one, was not sufficient probable cause for an officer to conduct a stop on the suspicion for impaired driving. This has held true even in a case where an officer may have witnessed an incident of erratic driving after the tip was received.

The Supreme Court’s opinion in Navarette does not allow for officers to make stops every time they receive an anonymous tip, but under appropriate circumstances, such as when the tip is reliable, officers may make a stop on the information provided by the tipster. According to the Court, a tip is reliable when the caller can provide a basis for the knowledge, such as the tipster had an encounter with the car, the call came as the dangerous driving occurred in front of the tipster, and when a call is made into 911, from which a tipster can be traced, eliminating the possibility that a tipster could call and lie without being punished.

The Supreme Court’s decision is a serious blow to defendants, who may now possibly be stopped by police officers solely because of the information a random tipster provided.

If you or someone you know has been arrested for and charged with driving while intoxicated, contact a an experienced attorney at SeiferFlatow today.