If you get hurt on the job in North Carolina, you’re not just left out in the cold. Workers’ compensation laws make sure you get the medical care you need. These laws also entitle you to compensation for the wages you would have earned were you not injured and out of work. 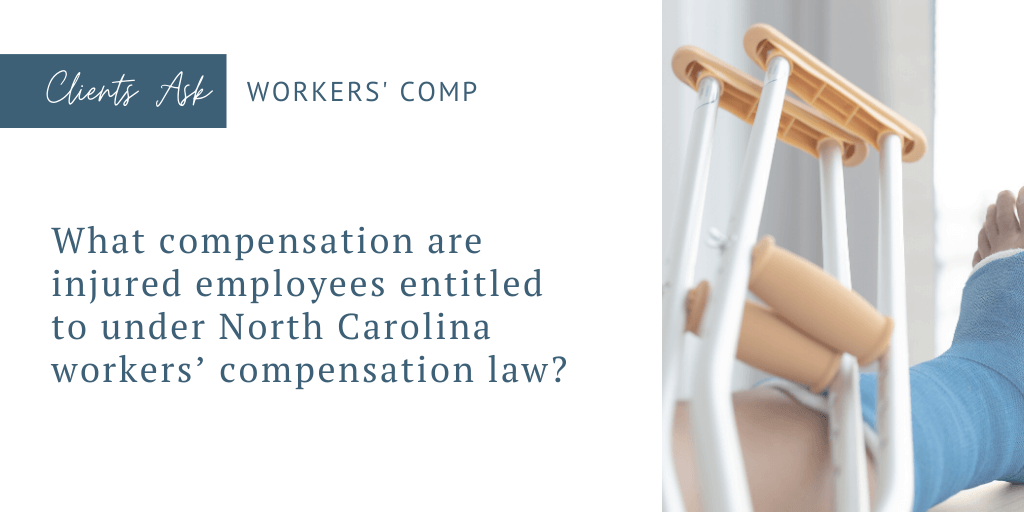 Am I entitled to workers’ compensation?

If you’re working in North Carolina and your employer has more than three employees, then you’re entitled to workers’ compensation.

What benefits will I get?

Workers’ compensation will cover all of your medical costs. They have to foot the bill for any treatment you need until you reach your point of maximum medical improvement (MMI).

Finally, you’re entitled to compensation for any point of “maximum medical improvement”. Your doctor will determine the extent of your loss of function and you’ll be compensated on a prorated scale to make up for the wages that you would have earned if you had full use of the injured body part.

How much compensation will I receive?

Let’s break down an example to illustrate how the amount of workers’ compensation is calculated.

Joe is a construction worker for Builders, Inc. and earns an average of $750 per week. He was walking across a job site when he slipped on a patch of ice and fell. He broke his wrist and hit his head. For a month, Joe will be too hurt to work at all. For another 2 months after that, he won’t have enough functionality in his hand to do construction work and instead will do part-time clerical work for the company for $200 per week. Even when he can return to his old job as a construction worker, his doctors say he’ll have pain and limited motion in his wrist for the rest of his life.

So, how much compensation is Joe entitled to?

After three months, Joe will be back at his old job earning $750 per week. However, he’s going to suffer from a permanent partial disability in his hand. How do we know how much that permanent damage is worth in workers’ compensation? The North Carolina Industrial dictates the guidelines for evaluating permanent disability. For a moderate loss of motion in the wrist, Joe is entitled to 20% of the value of his hand. In North Carolina, a hand is considered to be worth 200 weeks’ worth of compensation. Since Joe lost 20% of the functionality in his hand, he’s entitled to 20% of 200 weeks’ worth of compensation, which is 40 weeks’ worth. At $750 per week, the damage to his hand merits compensation of $30,000.

The insurance carrier for Builders, Inc. will get a second opinion to ensure that the evaluation of Joe’s injuries and permanent disability is accurate.

If you get hurt at work, you have the right to compensation for your temporary medical care, your lost wages, and any permanent loss of function and wages. Contact our an experienced attorney at SeiferFlatow – we can help you to get the composition you’re entitled to.