It goes by many names: Ecstasy, Molly, E, X, XTC, and more. It’s known as the “hug drug” and is popular among young people at nightclubs, raves, and dance parties. It’s also highly illegal. However, it’s readily available all over North Carolina and teenagers may have easy access to this popular party drug. It’s also fairly cheap – a dose costs $18-$40 at the retail level. When your child gets caught with Molly in North Carolina, what happens? 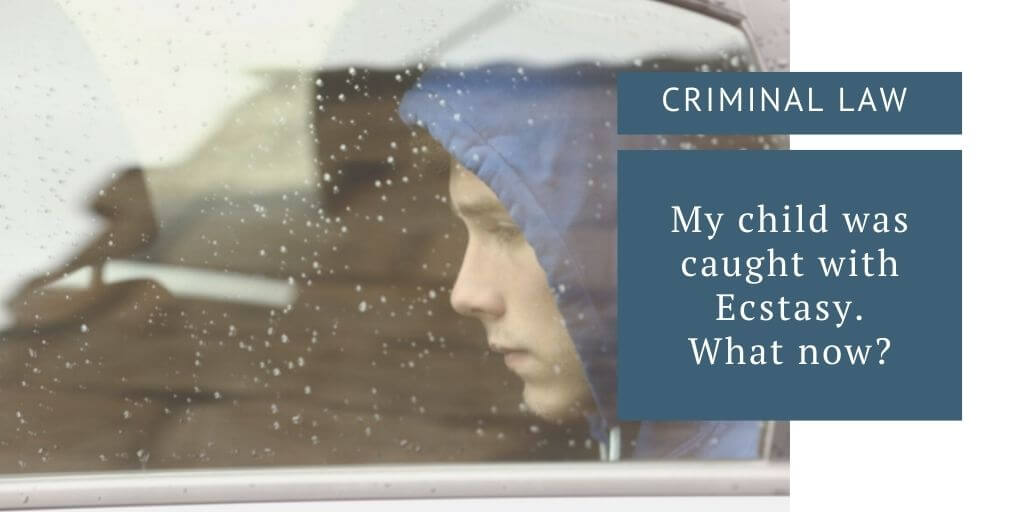 The active ingredient in Ecstasy is MDMA (or its close cousin MDA), short for 3,4-methylenedioxy–methamphetamine. It’s a member of the phenethylamine and amphetamine classes of drugs. It was accidentally invented in 1912 while a researcher was attempting to create a drug to treat hemophilia. The drug was later used as an experimental treatment for various mental health disorders. By the 1970s, it was being used for recreation. By the 1980s, it started to make its way into nightclubs and discos. Since, it has spread across the world.

Molly causes sensations of euphoria and increased connectivity with others. It may cause mild hallucinations and heightened sensory perceptions. For these reasons, it’s a popular party drug. Of course, it can have terrible long-term side effects. It has been shown to cause lesions in the brain, neurotoxic damage, damage to the blood vessels and white matter in the brain, and reduced gray-matter density. It can cause serious memory deficiencies. If taken during pregnancy, it can also cause serious neurological birth defects. In the short term, it can cause extreme dehydration and hyperthermia, which can be fatal.

Molly may be found in the form of a pressed pill or a powder; the pills come in many colors and are often imprinted with images. These images differentiate pills from different sources and cut with different substances; popular images include car logos, geometric shapes, and fashion designer logos. The powder form is most commonly referred to as “Molly” and is typically whitish, tan, or pale purple. Powders or pills may have brown flecks in them. The drug is typically ingested, although it may be snorted or even smoked. Getting high on Ecstasy is called “rolling.” The purity of the drug may vary significantly; it may be cut with inert material to add bulk or with other types of drugs to create a specific drug experience.

In North Carolina, MDMA/MDA is a Schedule I Controlled Substance under N.C. Gen. Stat. § 90-89(3)(c) and (d). That means it’s been found to have high abuse potential or to have no safe and accepted medical uses. Other drugs in this legal category include heroin, LSD, and mescaline. It is illegal to possess, manufacture, sell, or distribute MDMA/MDA and any drug containing that compound in North Carolina.

In order to convict your child for possession of Molly, the state will have to prove that the defendant:

So, your child must have known that the substance was MDMA or another dangerous drug. If she thought she was borrowing a bag of powdered sugar to make cookies, she’s in the clear. If she thought she was purchasing heroin and got MDMA instead, she’s still on the hook. Secondly, she had to have been in possession of the drug. That doesn’t mean it has to have been in her pocket. If she had control over the drug, or “constructive possession,” that’s sufficient. For example, if she had the drug in the glove compartment of her car, she was in constructive possession. Finally, the drug must be MDMA or MDA; the state will generally conduct a chemical analysis of the substance.

Possession is not the only possible Ecstasy-related offense your child may be facing. If she is caught with the necessary ingredients and equipment to produce MDMA, she may be guilty of manufacturing it. That’s a Class I felony punishable by 3-12 months in prison. Sale or delivery of Ecstasy is a more serious crime – it’s a Class G felony. A Class G felony comes with 8-31 months in prison. Selling Molly and bringing it to a friend for free are treated the same way under North Carolina law; you don’t have to actually receive money to be convicted. If your child is caught with a relatively large quantity of MDMA or if it’s packaged for distribution, she may be convicted of “possession with intent to sell.” That’s a Class H felony, worth 4-25 months in prison.

Ecstasy-related offenses are serious, but a conviction is far from guaranteed. In order to convict, the state needs to provide very specific evidence. Moreover, that evidence must have been gathered in a lawful way. If the correct procedures aren’t followed, the whole case may be thrown out. If the evidence is not sufficient, your child can’t be convicted. If your child is arrested for an MDMA-related offense, contact an experienced criminal attorney immediately. Your attorney can help you ensure that your child’s rights are respected in the legal system.

Regardless of the legal ramifications, talk to your children about the dangerous side effects associated with using MDMA and MDA.